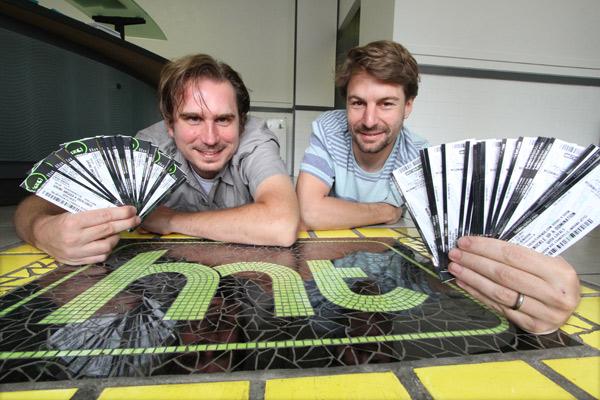 Albuquerque's HoldMyTicket is becoming a growing player in the local ticketing world and beyond.

"It worked great," Kottenstette said. "It's the future of ticketing."

Using HoldMyTicket software and the company's iPhone check-in system, Kottenstette could see who bought tickets, whether they had arrived and more — at a lower price than major competitors charge.

In the past year. HoldMyTicket has doubled in size to eight employees. Last year the company grossed $2.8 million in sales, and it's on track to roughly double that this year, said CEO Wes Edling, all from its office in the Sunshine Building in downtown Albuquerque.

The company has become a leader in using new technology, such as iPhone apps and integrated software that can sync calendars, ticket agents, social media, demographic reports and more to connect ticket sellers to concert fans.

Coast to coast, the company sells tickets for 550 venues and events, and three to four venues sign contracts every day.

HMT started after Joe Anderson, the owner of the Launchpad and Sunshine Theater venues, asked Edling and Jeremy McCollum if they could come up with a better ticketing system.

"I told him yea, but it would cost $40,000. It's complex," said McCollum, HoldMyTicket's president and COO. "But we saw that there could be a need for it."

McCollum is also a musician with the band Supergiant. As his band played at clubs across the country, he noticed they all had similar problems with ticketing. Their websites were out of date, lines at shows were unnecessarily long and tickets were only available at the door at small venues.

So McCollum and Edling started meeting every day at the Downtown Flying Star Cafe "for the free Wi-Fi," McCollum said, and started writing software, originally for the Launchpad.

The two would go to their day jobs at the Weekly Alibi, where they supported its website, then head back to Flying Star, sometimes until they were kicked out, working step by step on HMT.

In the early 2008, from a back booth near the kitchen, they sold their first ticket.

One early coup, Edling said, was figuring out how to sell for reserved seating charts.

Because of that, the first setup when a venue signs a contract is detailed.

HoldMyTicket needs to know where every seat is, how much every seat will cost, where the priority seats are, which seats will be held and where the ticket booths are.

What made HMT really take off, though, was the new generation of iPhone-compatible code readers and QR code scanners.

"It worked great at Tingley last weekend," Kottenstette said, "I could show [the fire marshal] his exact numbers and get back to work, rather than having to spend 20 minutes doing a crowd count."

The check-in system also makes it easy to spot a stolen ticket (via ID) or a fake ticket (because it won't scan).

Edling and McCollum want to compete with the bigger ticketing companies.

Industry behemoth Ticketmaster has, by some estimates, 83 percent of the overal ticketing market, according to the Washington Post, and sells tickets for venues across the globe, including the Hard Rock Casino Albuquerque PResents The Pavilion.

"Competing with that is tough." Edling said, "We're trying to find the venues that don't need Ticketmaster."